All sea states mentioned under 2-D can also be generated as oblique uni-directional waves. This includes also full 2nd order corrections for both uni-directional and multi-directional cases (Schäffer and Steenberg (2003) theory). The only exception is the irregular waves based on the numerical model input which currently is only available for waves perpendicular to the wavemaker.

Multi-directional sea states gives the most realistic representation of waves from the prototype and is of course also supported by AwaSys.

Generation of oblique uni-directional and multi-directional waves leads to undesirable diffraction and reflection zones due to the finite length of the wavemaker (see figure below). The conclussion is that only a central part just in front of the wavemaker has high quality waves. However, reflective sidewalls can be used advantageously (Dalrymple (1989) corner reflection method) to minimize the problems of diffraction and thus greatly increase the area with correctly generated oblique and short-crested waves in the basin. Therefore, it is recommended to construct basins with reflective sidewalls on the first part of the basin followed by absorbing sidewalls on the last part to absorb reflected and diffraced waves from the models tested. Such configuration is used for example in the shallow water wave basin at Aalborg University and most other leading laboratories. The Dalrymple method is implemented for regular waves as well as for the irregular wave synthesis methods. 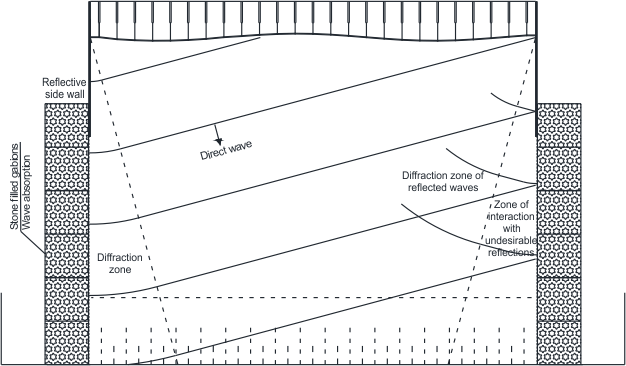