The purpose of the active absorption system is to avoid the reflected waves from structures in the flume/basin to be re-reflected at the paddles and become incident waves. Active absorption is very important for accurate wave generation especially when testing highly reflective structures occupying a large part of the width of the facility.

Without active absorption re-reflected waves will contaminate the desired incident waves. Highly reflective structures like caisson breakwaters will cause extremely significant deviations from the target wave field if active absorption is not applied. The deviations are observed as peaks in the incident spectrum at the resonance frequencies of the facility. Active absorption is important for all models causing considerable reflections and/or problems with long period resonance components in the facility.

When active absorption is applied the reflected waves approaching the generator are predicted in real time and paddle control signals are modified to absorb the waves approaching the generator. The result is that the control of the incident waves is maintained throughout the test. Active absorption is also sometimes called "reflection compensation" as the control signals are compensated for the reflected waves from the structures in the facility.

The active absorption solution in AwaSys is running within the same PC and the same software that generate the waves. AwaSys is thus simultaneously in real time generating the target incident waves and absorbing the un-wanted reflected waves. The advantage of that solution over distributed solutions in each generator is significantly fewer electronic components and easier upgrade solutions. A software upgrade on the main PC can thus be used to upgrade the system to take advantage of PC hardware developments, new generation/absorption methods or other issues. The result is a highly flexible and future proof system that is very easy to maintain.

Both absorption methods have been extensively tested and can be applied for piston, hinged or other wave maker types. The advantage of the latter (system 2) is that it can be applied in both flumes and basins. Moreover, the latter system has significantly better performance for low frequency components and also better performance for superharmonics in case of intermediate and deep water conditions.

For both systems the theoretical reflection coefficient of the system is shown in the preferences dialog in AwaSys where the working frequency band and filter parameters can be tuned. Below figure is an example of a performance figure from AwaSys for a basin (System 2) with piston wave makers with vertical hinged paddles (snake type) of 50 cm width. The servo delay is 35 ms (VTI servo controller) and the water depth for the shown example is 70 cm. Working frequency band is in this case set to 0.1 Hz to 1.0 Hz and it can be seen that in most of this area (0.16 to 1.0 Hz) the theoretical reflection coefficient is lower than 7% on wave height (0.5% on energy). Even for the pseudo 3-D system the reflection coefficient is less than 14% in the same interval for an obliqueness of 40 degrees. The performance of the system in the very low frequency range is extremely good and more than sufficient to avoid seiches building up in the facility which is very important for example for reliable overtopping measurements. 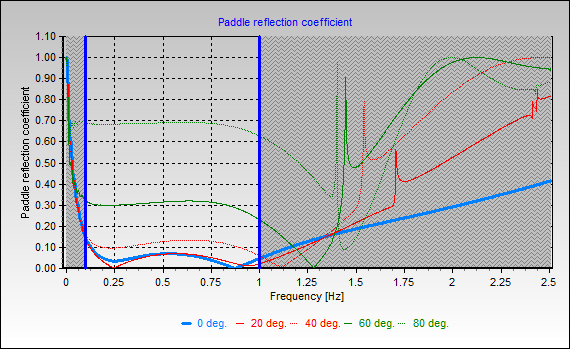 Below figure shows an example of a test of the latter absorption method (System 2) in a wave flume with a vertical wall structure in one end and a piston generator in the other. A fifteen second sequence of regular waves is generated and the wave elevations are measured respectively with (lower figure) and without active absorption (upper figure). The signal shows first the incident sequence of waves then the waves coming back after having been reflected at the structure. Hereafter, no waves should be present if the active absorption is perfect. In the first part before the reflections have reached the paddle the two signals are identical, i.e. absorption loop does not affect the wave generation quality. Hereafter, it can be seen that the active absorption of the reflected waves is almost perfect while without active absorption the control of the waves is completely lost.

Figure 2: Example of generation of short group of regular waves (T = 1.5s) in a wave flume equipped with system 2 (lower figure) and with active absorption turned off (upper figure).

A video demonstrating the absorption of such a group in a wave basin is available for download (18 Mb). In the video an oblique wave (20 deg.) is generated be reflected at a vertical wall perpendicular to the incident wave. Due to diffraction effects the direction and amplitude of the reflected wave to be absorbed varies along the wavemaker. The wave generation stops after 20s and continues with active absortion (calm-down). The video visually demonstrate a very large improvement compared to no absorption.

The following figure shows generation of long duration regular waves with a vertical structure in the flume. It can be seen that with active absorption the incident waves maintain a constant form and height, but without active absorption the control of the waves is lost once the first re-reflections occur.

A video demonstrating the absorption of such a long duration regular wave in a wave basin is available for download (103 Mb). In the video an oblique wave (20 deg.) is generated being reflected at a vertical wall perpendicular to the incident wave. Due to diffraction effects the direction and amplitude of the reflected wave to be absorbed varies along the wavemaker. Absorption is turned of after 1:15 and then control of the incident waves is lost very fast (many incident directions exists). Turning absorption on again (after 2:25) the control of the incident waves is gained again within few seconds. The video thus visually demonstrate a very large improvement compared to no absorption.

AwaSys also supports facilities with one or more wavemakers generating waves and simoultaneously one or more only absorbing the waves. Thus passive absorbers can be replaced by active ones. A video showing a flume with such setup generating waves with H = 0.25 m and T = 3.33 s may be download here.

Active absorption control signal correction as well as incident and reflected spectra can be monitored in real time from the graphical Windows interface in AwaSys. The user can thus check online during a test the reflective properties of the structures and that the generated incident spectrum is in well agreement with the target. To enable active absorption the user only has to check a box in the AwaSys main screen. Equipping a wave generator with active absorption requires no extra software or control system modifications, but requires only wave gauges to be installed and routed to the AwaSys DAQ board. The active absorption in AwaSys can be used also for fast calm-down after a test has finished.